For Immediate Release
100 Thousand Poets for Change in Vancouver, Portland, and around the
world Saturday, September 24
Contact: christopherjluna@gmail.com

Niche/Angst poet laureate and Ghost Town Poetry founder Christopher
Luna invites Vancouver and Portland writers and artists to participate
in the largest poetry reading in history on Saturday, September 24.
100 Thousand Poets for Change, a global event uniting writers who
believe in the power of language to create social and political
positive change, is a grassroots effort in which anyone can
participate. The intention is to find ways to bring your message to
the larger community through outdoor events and readings in
non-traditional places. This is why I did not plan an open mic at a
bookstore or coffee shop. Each of you can create your own event or get
together with a few friends. Starting at 1pm I will be reading and
writing poems outside Niche Wine and Art Bar, interacting with
passerby and providing help and advice to poets who would like to
participate. However, in the spirit of the event, please feel free to
initiate and execute your own activities. Then send all poems and
photographs to me at christopherjluna@gmail.com or post them as a
reply on our 100 Thousand Poets for Change blog:

Please read the press release below for more information about this
historic event.

650 events in 450 cities and 95 countries will take place on September
24 to promote environmental, social, and political change. Poets,
writers, artists will create, perform and demonstrate in their
communities, and decide their own specific area of focus for change
within the framework of peace and sustainability, which founder
Michael
Rothenberg stated, “…is a major concern worldwide and the guiding
principle for this global event.”

Bob Holman and Margery Snyder, in a recent article on About.com said,
“the beauty of the concept of 100 Thousand Poets for Change is that it
is completely decentralized and completely inclusive.” All those
involved are hoping, through their actions and events, to seize and
redirect the political and social dialogue of the day and turn the
narrative of civilization towards peace and sustainability.

Poetry demonstrations are being organized in political hotspots such
as Madison, Wisconsin and Cairo, Egypt. Poetry and peace gatherings
are planned in strife-torn Kabul and Jalalabad.

In Mexico there are over 30 events, with 18 poetic actions in Mexico
City, where poets as well as environmental and political activists are
hoping to encourage reflection and creative responses against systemic
violence through the written and the spoken word with day long street
events, readings and workshops. More than a third
of these events are organized by collectives actively working towards
a non-violent approach to solve the country’s most pressing problems.

To date there are over 260 events in the United States. There are 20
events statewide in North Carolina where teacher/poets have mobilized
to protest cuts in education funding. And along the Platte River near
Omaha, Nebraska, poets will be demonstrating against TransCanada’s
planned Keystone XL tar sands pipeline. More examples of events can be
found at the 100 Thousand Poets for Change www.100TPC.org. Each event
organizer has an Event Location blog page on the website for posting,
poetry, artwork, photos, and video to document this global mega-event
across national borders.

Immediately following September 24th all documentation on the
100TPC.org website will be preserved by Stanford University in
California, which has recognized 100 Thousand Poets for Change as an
historical event, the largest poetry reading in history. They will
archive the complete contents of the website, 100TPC.org, as part
of their digital archiving program LOCKSS.

Founder Michael Rothenberg is a widely known poet, editor of the
online literary magazine Bigbridge.org and an environmental activist
based in Northern California. 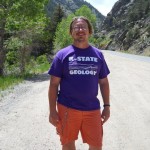