↓
Home Menu ↓
Home→*UPDATES*→FSU Article: To Not Feel Alone in the World: 100 Thousand Poets for Change

On September 30th, hundreds of thousands of poets will join together at over 500 events in 100 countries across the globe. One of these events will take place in our own Black Dog on the Square and 621 Gallery, both located in Railroad Square Art Park. This is the 7th annual global event for 100 Thousand Poets for Change, a movement that works with artists to organize events globally in order to promote peace, justice, and sustainability.

The founders, Michael Rothenberg and Terri Carrion, began 100 TPC from Sonoma County, California in 2011 out of a desire to put the fire and activity back in poetry. Reminiscing on his own childhood in Miami, growing up reading Allen Ginsberg and Jack Kerouac, Rothenberg muses that his perception of poets were active people, and political as well, that “to be a poet is…to be engaged.”

With a desire and an idea, they reached out to see if there was anyone else who cared about changing this lethargic climate, and people responded by the hundreds. The first year, they had 700 events all over the world. Since then, the events have expanded into “100 Thousand Mimes for Change” in Egypt, to “100 Thousand Musicians for Change.” About a year and a half ago, they left California and moved here to Tallahassee, where they hosted their first local event last year in Railroad Square.

Rothenberg and Carrion were approached by Stanford University, who heard about the movement and wanted to archive what they were doing because they believed that these are historical events as the largest organized poetry movement. They asked the different event organizers to start collecting posters, photos, videos, anything they could gather for the archive. Of course, the loyal organizers responded once again in full force. Posters came in by the hundreds, a few of which can be seen at their website, https://100tpc.org. It was incredible for Rothenberg to see these posters and photos, who said that seeing the effort put into these events “makes it real…there are these people all over the world that this matters to.”

It’s also important because Rothenberg and Carrion do not see themselves as the center of the movement, but instead as facilitators of these events. They do what they can to eliminate a power center, enabling different events to cater to their local populace in whatever way they see is fit.

Rothenberg is also very quick to point out his co-founder, Carrion, is a huge part of the movement. She works on all the media and website details, while also being a local activist and poet herself. Her biggest motivation for starting this movement echoed deep in the state of our society today, “ to not feel alone in the world”. This movement propels the idea that poetry and art can invigorate and unify people of any race, religion, color or creed. 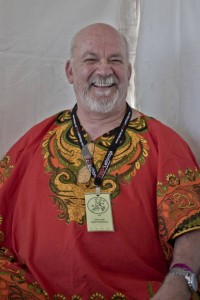