100 Thousand Poets for Change Stand Up for Tibet

Why You Should Stand Up For Tibet from International Tibet Network on Vimeo.

Photo credits to photos below:

The photo album of Tibetan Association of Southern California. 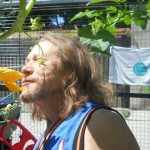